I recently gave a talk at the University of Toulouse, Jean Jaurès. Here is a video of that presentation. 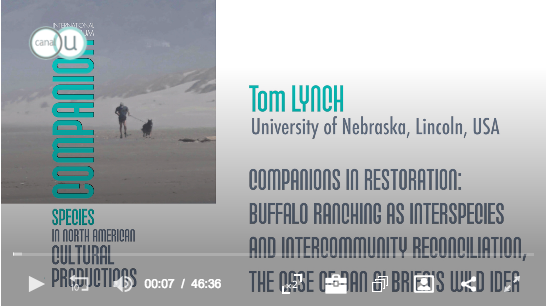 In the European settlement of North America, companion species were an essential component of the settler-colonial process. As Alfred Crosby and others have demonstrated, Europeans brought with them a suite of animals and plants from the old continent that they utilized both to supplant the Indigenous populations and then to reconstruct a neo-European landscape replete with grasses, shrubs, trees, and domestic animals that were either derived from, or closely approximated, European varieties.  This process had enormously detrimental effects on various native bioregions, at times completely altering their composition.

One of the most notable examples of this process was the replacement of native bison by imported European cattle varieties over nearly the full extent of their original range, resulting in the near extinction of the bison by the last years of the 19th century. As is well known, buffalo were an integral species in the lives of the Native communities of the prairie biogregions of the Great Plains, providing sustenance, shelter, clothing, and a variety of material goods; and the species was central to the religious life of most prairie cultures. The animal and the people had an intimate, one might say companionate, relationship.

In the past century, the cattle ranching industry that replaced the bison hunting regime of the Indigenous populations has proven to be difficult to sustain ecologically, economically, and socially. This has resulted in renewed efforts to restore bison to some of their historic range, a project that can perhaps be seen as an attempt to renew a companionate relationship between humans and buffalo on the Great Plains.

In this paper I examine a number of works of non-fiction, in particular Dan O’Brien’s two memoirs, Buffalo for the Broken Heart: Restoring Life to a Black Hills Ranch and Wild Idea: Buffalo and Family in a Difficult Land, that recount efforts to supplant the settler-colonial cattle industry with a restored economy/ecology based on bison. I pay particular attention to several elements:

1)    the efforts to prevent buffalo raised on ranches for slaughter from becoming industrialized like the cattle industry. That is, can ranched buffalo maintain much of their wildness and species autonomy?

2)   the ecologically positive cascading effect of replacing cattle with buffalo, which seems to result in an increase in biological diversity and richness.

3)    the similar potentially positive effect on familial and social relations of buffalo restoration.

4)   the possibility of enhanced connections between European settler-colonists and Indigenous communities based on a mutual interest in buffalo ranching.

In short, my paper seeks to address the question of the degree to which buffalo ranching can be seen as an effort at reconciliation between settler-colonists and both native species and Indigenous communities. Can the companionate relationship between people and bison be restored on the Great Plains, and if so, with what rippling consequences?